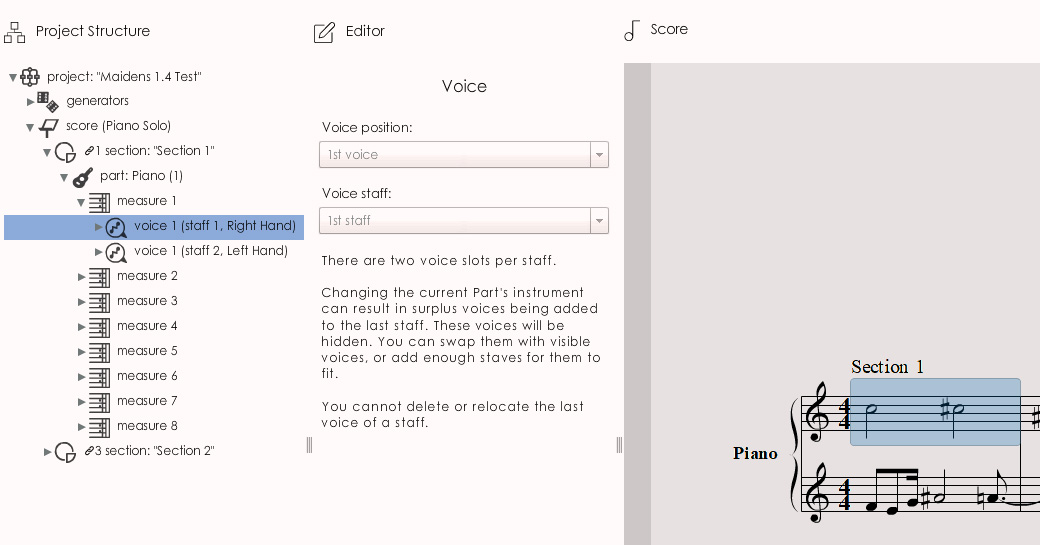 The voice is a container for cluster nodes.

In MAIDENS, voices distribute content among the available staves of a part. For example, a Piano playing four polyphonic lines would use four voice nodes, allocated two per staff. A voice is allocated to a staff via its Voice staff property.

Voices can also help save space in crowded scores by fitting twice as much music on a single staff. Two voices allocated to the same staff can display with stems up and “stems down” respectively. You achieve this effect by setting the Voice position property.

MAIDENS defines the concept of voice slots (a unique staff/position combination) and uses it to build a voice management mechanism that revolves around two rules:

To enforce the ruleset above, a number of operations are automatically performed on voices, while others are prevented. For instance, if you change a voice in the Editor, replace a part’s Instrument, modify its Number of staves or create a new part, then some voices may be swapped, pushed down or dealocated; also, new voices may be created. Similarly, if you select a voice that is alone on its staff, then you won’t be able to delete or move it.

Note: in this case, if a voice swap is what you intended, check if moving the other voice is an option. As a last resort, create a replacement voice to be left in lieu of the one you are moving. Works for deletion too.

In the Editor, you can set the Voice position and Voice staff. As stated, they are only available if the current voice is not alone on its staff. The same applies to the Delete element command (in the Tool Bar and in the Score contextual menu).

Note: the complete list of pending bugs, features and epics is available in Jira.

Hint: use the browser's search feature to search within results (use Ctrl+F on Windows or  ⌘+F on macOs).